Police in Calgary are asking for the public’s help to find a man who is preying on the good will of strangers in attempted thefts. This is very similar to a story which we at Phila-Locksmith covered during May of last year. In Nevada, a man was posing as a neighbor and asking for cash to help to pay a locksmith in order to get back into his home. After deceiving a few local residents, the man was found to not be a neighbor. In Calgary, a very similar situations is unfolding. 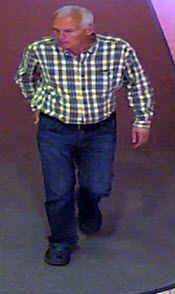 Pictured is the suspect that Calgary police are looking for in connection to these thefts by deception. The man that police are looking for goes simply by ‘John’. The way that he attempts to steal from people is in an extremely deceitful manner, which preys on the kindness of strangers. John has been known to enter business, or public places, during peak busy hours. At this point he begins to talk to individuals claiming that he is locked out of car. He asks for a small amount of money. In situations where he has been refused the money, he has offered personal belongings as collateral. After he receives the money, he then did not return to retrieve the collateral. The man has been described as between 50 and 55 years old and roughly 6’2″ in height. Calgary police are hoping that increased public awareness will assist in his apprehension. This story should also serve as a warning to the residents of Calgary, be sure to employ a healthy dose of skepticism to avoid being taken advantage of. This is especially important for business owners who want to ensure their lower level employees are not taken advantage of. Instilling a diligent attitude can prevent this from happening.

Our customers may ask, how can news like this effect me? As mentioned earlier in the post, this is not a scheme which solely takes place in Canada. Residents in our service area should also ensure to use a bit of skepticism when confronted with someone asking for cash assistance. If that individual is asking for money to pay a locksmith, let that individual know that you will help them, but want to call the company directly. Most mobile locksmiths also accept credit, or debit, which allows for you to still lend helping hand to someone in need, but without the risk of being taken advantage of. Our communities should work together to help those of our neighbors who are in need, but in today’s world, it is still wise to exercise healthy skepticism to ensure that you are not taken advantage of. If you have any information about the identity of John, Calgary police ask that you contact them.