(VIA KMGH-TV) An interesting story came out of Denver, Colorado this weekend. On Saturday, March 29th, a 26 year old Denver women called 911 to report that she had locked her keys in car, but in addition to this she claimed that she had also locked her children in the car as well. Thinking this was the case firefighters were quickly dispatched to the scene to open the door and get the children back to their mother. However, once the firefighters and police arrived on scene they found that there were actually no children in the vehicle at all. 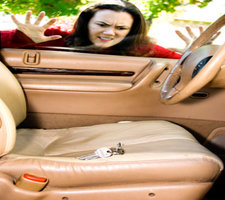 What firefighters who were first to respond found was that this woman was in such a panic that she could not find her car keys that she lied to the operator in order to get emergency personnel to come and open her door. Who knows what her plan was for once the police and firefighters arrived, but it certainly could not have been what ended up occurring. In the end the 26 year old woman was ordered to appear in court for misuse of emergency services. A spokeswoman for the Denver police had this to say following the incident.

Never call for that. If you lock your keys in your car, you have to call a locksmith. We are not there to unlock your vehicle – Raquel Lopez Denver Police Spokeswoman

While no one wants to have to call a locksmith in the case that they have locked their keys in the car, it is necessary. Calling the police can not only end up costing you additional money down the line, but can also get you into legal trouble. Your best bet is to find a trusted locksmith who is located close to you and program their number into your mobile phone. It is better to pay the locksmith’s labor fee than to have to deal with larger court fines and fees down the line. Not only did this woman waste the time of firefighters and police officers who could have been assisting people who were dealing with real emergencies, but she will also have to waste her time all because she wanted to avoid a simple charge from the locksmith. After all of this, the story did have a very ironic ending.

according to KMGH-TV, firefighters were able to unlock the car. Shortly after doing so a child came out of the house with car keys in hand

Moral of the story, make sure to do a thorough search of your home before assuming that the keys are in the vehicle!