In Evesham, England, some thieves attempted to break-in to the wrong type of business just weeks ago. During the early morning hours of January 14th, closed circuit television cameras on Amber Locks, a local locksmith company located in the area, picked up two thieves attempting to break-in to the business. Apparently, it did not occur to these thieves that a business which specializes in assisting with residential and commercial security may have solid security of their own to prevent thefts. After multiple failed attempts to break-in the thieves wound up leaving the location. The owner of the business has released the closed circuit television images and is looking for people to help bring these criminals to justice.

At Phila-Locksmith we stress the need to have effective commercial security that is tailored to your exact needs. The reason for this is evident in this attempted break-in. Had the thieves been able to get inside of the locksmith shop, the business would have been ransacked. This would have left the owner of the business unable to complete his normal operations due to missing parts and machines. This would be in addition to any damage which would have to be repaired.Fortunately in this situation, Amber Locks had commercial security that was up to the test of these two thieves. The owner of Amber Locks said, “Whoever broke in damaged the door as they tried to get in, but we are locksmiths so, of course, we have very strong locks“. Strong locks are likely only part of what helped to drive the thieves away. As locksmiths the company was able to professionally install their own locks which were at a security grade which would be effective against such tactics. This thinking should be part of every commercial security plan. It is crucial to prepare your business properly for the threats that it may face to ensure the continued function of your business. 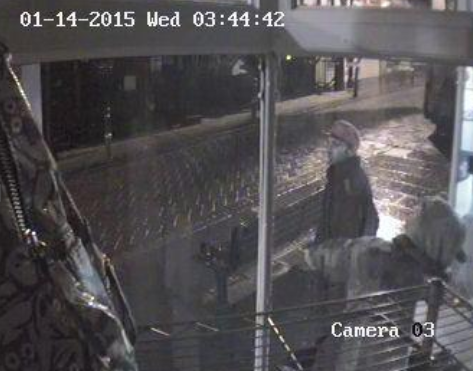 Above is a closed circuit security camera image of the attempted thieves.

In this case it was fortunate that the locksmith was able to prepare his security so that this theft was prevented from interrupting their normal business operation. While the owner claims that repairs to the door will cost about $100, that is a drop in the bucket compared to the loss of business and property that would have occurred if these thieves were able to get inside of the business. Local business in Evesham should be more likely to turn to the security services that Amber Locks has to offer after this effective demonstration of the commercial security that they are able to offer. Just like Amber Locks, Phila-Locksmith is helping business owners in the Philadelphia tri-state area to achieve the level of commercial security that they desire for their business. Contact us today to discuss the needs and options of your business directly with our technician. He is able to provide you with a free consultation that will help to identify weaknesses and strengths in your commercial security.
Post Views: 127
Previous Post
More Police Refusing to Provide Free Unlocks
Next Post
51 Death Claims as GM Recall Deadline Passes